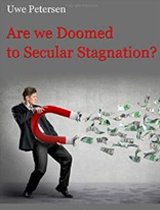 Are we Doomed to Secular Stagnation? Limitations of Supply-Side Economic Policies

Are we Doomed to
Secular Stagnation?

B. Why is the present capitalist secular stagnation not recognised by prevailing neoclassical economic theory?

II. Inadequate theory of the development of the relationship between economic supply and economic demand

III. Lack of understanding of the role of money in a primarily capital-market-oriented economy

C. The need for a new understanding of the principles of a healthy economy and economic policy measures to combat secular stagnation and stabilise the economy

I. Improving market opportunities for all citizens by overcoming the entrenched practice of feudal inheritance which is incompatible with the system

III. The ‘re-naturalisation’ of the money and capital markets 1. The neutralisation of circulating government bonds in order to educe currency speculation instead of acquisition by central banks 2. Banking regulation 3. Regulation of the money market

4. More state investment to fund collective needs and to prevent the unnecessary relocation of operations

I. Criterion: Higher savings than there are lucrative private sector investment opportunities in the real economy

II. Criterion: extreme inequality in the distribution of income and wealth

IV. Rising property prices due to increasing pressure to invest

E. How economic policy is still only treating the economy’s symptoms and this is increasing its susceptibility to crises, as illustrated by the Merkel government

I. How the Merkel government’s economic and taxation policies are not reducing export surpluses and are thereby increasing the economy’s susceptibility to crises

III. How the Merkel government is exacerbating secular stagnation through insufficient public investment

V. Insufficient reduction of public debt in order to lessen the economy’s susceptibility to crises caused by speculation, and in order to act as a role model for other Eurozone counties

VI. The Merkel government’s lack of understanding of monetary policy in times of secular stagnation

On 21 November 2013 ‘Larry Summers, during a speech at the IMF’s annual research conference last week, stirred up a hornet’s nest by painting a picture of a future with chronically weak demand and sluggish economic growth: a phenomenon known as ‘secular stagnation’. He is not the first to point to such a scenario. Paul Krugman picked up on the ‘secular stagnation’ hypothesis from the early postwar period in his blog two years ago. Meanwhile, the specter of imminent deflation dominates especially the monetary authorities, since their opportunities to ban this danger by interest rate cuts and multiplication of money are vanishing. The prevailing neo-classical supply-side economic theory and policies do not understand the phenomenon and the causes of secular stagnation. Therefore their economic policies only fight the symptoms and, if they still work, they only boost capital market games and capital combustion, but at the same time increase the fragility of the economic system. The economic prosperity in Germany is paid with its export-surpluses and corresponding export of capital, by which the surplus savings are transferred abroad. Germany therefore displaces unemployment abroad. Since Germany nevertheless also fulfills all criteria of a secular stagnation, it is living economically on a volcano. The Merkel government does not understand the phenomenon of secular stagnation, the economic problems of the ailing European countries and the monetary policy of the European Central Bank, without which the euro-zone already would have collapsed. Therefore, Germany’s measures and economic postulates increase the risk of crisis, instead of fighting against its criteria and serving as a model for the smaller countries on how to overcome the economic crisis.