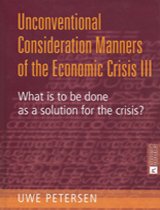 In the beginning of 2011 „Unkonventionelle Betrachtungsweisen zur Wirtschaftskrise. Von Haien, Heuschrecken und anderem Getier“ [Unconventional Consideration Manners of the Economic Crisis I. From Sharks, Grasshoppers and other Creatures] was published which explained aphoristically succinct aspects of the economic crisis. At the end of August, 2011, the second volume with the subtitle „Illnesses of the Economic System and Possibilities and Limits of their Healing“ appeared in German, which analyses the traditional measures of the economic policy and exemplarily describes the economic case history of single countries. The result of these analyses was that the conventional economic policies only cured symptoms but aggravated even the fragility of the economic system. Therefore in this book (a little modified and actualised translation of the third volume published in German in 2012) unconventional solution possibilities of the financial and economic crisis are indicated, and are backed up ethically. The treatises in this volume are clear for themselves, and at the same time give an overview about the crisis problems all together, and that’s why it seemed to be justified to translate only this volume in English.