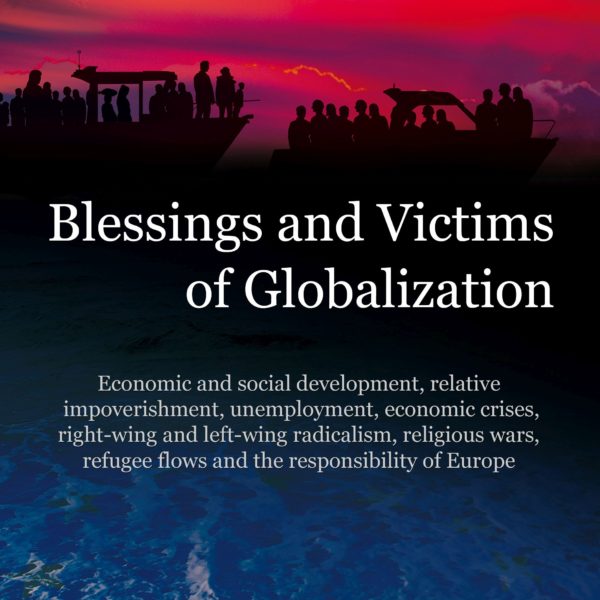 III. Religious missionary work for the further development of mankind. 14

1.1 The essence of individualization. 29

1.2 Humanism as the authoritative philosophy of life in the European Western world. 32

1.3 The secularization of Jewish-Christian eschatology in strive after progress. 32

3.1 The danger of the self-destruction of the capitalist economy by the   displacement
of the workforce by increasingly intelligent machines and the  danger of
monopolizing the world economy by a few global players. 37

3.2 The transition of the capitalist economy into a secular stagnation as a result of a
too high saving rate in respect to the real economic investment opportunities and the growing danger
of economic crises. 40

3.2.3 The Importance of state expenditure for the economic balance of supply and demand. 42

3.3. The increasing global public debt and the rising  danger of state bankruptcies. 43

3.4 The perversion of the capital market to a gambling casino. 44

3.5 The money flooding of the capital market by the central banks  to avoid
depression. 46

3.6 Summary of economic and social Development of capitalist  industrialized
countries. 46

4.1 The globalization of Western Europeanism by colonization of the  Third World. 47

4.1.1 The development of international trade relations, imperialism and colonization  up to the
First World War 47

4.1.2 The colonization of the Near East and North Africa by the establishment of  French and British mandated territories
after the First World War 53

4.2 The development of nationalism in Europe and developing countries after the Second World War. 60

4.2.1 The demise of ancient European nationalism and the independence of the colonies and protectorate territories
after the Second World War. 60

4.2.2 Nationalism in developing countries as the driving force for the development
of a secular society and its tense relationship with religion, theocracy and tribalism.. 62

4.3 The impact of Europeanism on Third World Countries. 63

4.3.1 The destruction of traditional forms of life by Europeanism.. 63

4.3.2 Faster population increase through better medical care as an  additional
reason for conflicts in developing countries and emigration to Europe. 64

4.4. The economic development of developing countries and the  development policy after the Second World War. 64

4.4.1 The increased globalization of trade through the conclusion of the  General Agreement on Tariffs and Trade (GATT) 66

4.4.2 The merger of individual countries into free trade zones and  economic unions. 69

4.4.4. The emergence of Emerging Markets and their impact on the  economic development of
industrialized countries. 75

4.4.5 The globalization of the capital market 76

4.4.6 The globalization of secular stagnation. 78

4.4.7 Tendency for decreasing employment by rationalization, especially as a  result
of increasing digitization and robotization. 78

4.5 Globalization and the environment 79

1.2 Russia’s ambivalent relationship with the West and the consequences for  the development of Russia. 84

2.1 The Eastern Europeanism of Poland as a Slavic country. 92

2.2 The self-image of Catholic Poland as the guardian of the true   Europeanism.. 97

2.3 The fall of Poland as a noble republic and its rebirth as nationalist state. 100

III. The development of East-West antagonism and its impact on the Third World. 103

2.2.3 Afghanistan as a plaything of eastern and western globalization and the religious Resistance
against it 119

2.2.4 The development and role of militias in Afghanistan. 121

2.3.2 Decline of the Ottoman Empire, especially because of backwardness in relation to Europe and insufficient willingness to reform   123

2.3.3 The collapse of the Ottoman Empire due to increasing national aspirations of its different ethnicities. 126

2.1 Errors in the founding of the European Union and its consequences. 190

2.2 The Eurozone and the consequences of errors in its creation. 192

2.3 Germany’s endangerment of the European Union and, in particular, the
Eurozone, through Agenda 2010. 194

2.1 Economic stabilization and further development of the European Union. 208

2.1.2 Economic promotion measures to overcome the inequality  in the economic development
of countries and regions. 210

2.1.3 Protection of sensitive industries of the European market and prevention
from their emigration. 211

2.1.3.2 Participation of employees or of the state in the important companies of the national economy. 213

2.1.4 Capital transfer taxes, the coordination of tax policy and the fight against tax fraud, tax avoidance
and dodging it in tax havens. 214

2.1.5 Stabilization of the euro zone and new monetary policy principles. 215

What is money and what would be the overcoming of the illusionary idea of money
as a promissory note of the central bank in favor of recognition of money as
a product of the state mean?. 216

The fact that we must deal with the problems of the whole world today is a result of globalization. We must be aware of the fact that globalization is a globalization of our European spirit, our way of life, our technology, including the atomic bomb, our economy and society, and so we are responsible for what is happening worldwide.

As a result of globalization, we cannot only observe a growing standard of living and a faster population growth due to improved health care and medicines, but we also have to complain about relative impoverishment, unemployment, economic crises, left-wing and right-wing extremism, religious wars and huge refugee flows.

To the extent that the negative consequences of globalization affect the Western world, they lead to general uncertainty, which then manifests itself in a loss of confidence in political institutions. Even the greatest achievements of the post-war period, the overcoming of nationalism and the unification of Europe, are questioned and disproved, and salvation is sought in foreclosure and national autonomous regions.

A possible interim climax has been this aversion to established institutions and powers in the election of US President Donald Trump who, and this is already the questionable nature of his programmed policy, promises, along with other billionaires and, with the promotion of capital market games, to lead the mass of the economically backward to new prosperity and new greatness. To this end, he wants to decouple the US from the world market and return lost industries to the country.

All the small Trumps: Victor Orbán, Jaroslav Kaczyinski, Gerd Wilders, Marine le Pen, Beppe Grillo, and the leaders of the PEGIDA and the AfD and their followers in Germany, cheer him and also proclaim their independence and their intention to leave the Eurozone or even the European Union. In doing so, they forget that the US can afford to foreclose and be self-sufficient because they have such a large domestic market that they can force foreign manufacturers to produce in the USA if they want to sell there. But who else wants to invest in smaller European countries?

From purely economic market perspectives, these nationalists would lead their country to the outside and without the backing of the other European countries and without the European Central Bank defending them against the growing monetary and economic turbulences. What a withdrawal from the European Union means can be clearly seen in Great Britain according to BREXIT, if Great Britain can still be called „great“ after a loss of Scotland.

Their ray of hope is that Donald Trump would help countries leaving the EU. He only thinks of America and only recognizes strength. Of course, he is interested in the fact that the power factor of Europe is disintegrating. Since the European Trumps do not recognize the need for a strengthening of Europe, in order to be able to confront America and other great powers, they also prove to be political twits.

The increasing dissatisfaction with the given circumstances is not unfounded. It is the result of an inadequate development of the economic and social theories and ideals and the policy determined by them. Disharmonies developed in this way. In particular, there was an increasingly unequal development of wealth and income. Apart from the social injustice involved, an ever-growing economic demand gap arose as a result of the too high savings in relation to the promising investment opportunities and innovations. The demand gap could only be compensated by increasing government expenditures or by the fact that, as in Germany, excess demand is shifted abroad by export surpluses. Thus, the growth rates remained lean and favored almost only the already wealthy. Only the capital market games flourish and celebrate the breakthrough of ever higher stock index brands.

The naivety of the assessment of contemporary history, society, and thus economic development also means that a man’s image is expressed according to how he has always been more or less structured and assessed as in the modern Western world. This also makes it unclear why civilizations and cultures have developed differently and why it is not possible to introduce Western democracy into any social order. It must be realized that the spirit of people, their feelings, their willingness, their behavior, their self-confidence have only developed over many thousand years and the development has been different in the individual countries. Many things are common to all men, but many things are also different, and if these differences are not heeded, no reasonable interpretation of social, economic and political conditions is possible.

The analysis of the economic, social and political conditions of the world also shows that it is not enough simply to compare power relations, economic development and raw material reserves, but that spiritual and, in particular, religious motivations can be much more important drives for political and social actions. The failure of the US in Vietnam, the Iranian revolution, the quick growth of the IS, and its assertion cannot be explained otherwise.

It may come as a surprise to the contemporary reader that we trace the discussion of the problems of globalization back to religion. But if one considers how far other religious denominations, especially Islam, determine the social ideals of Muslim countries and international politics, then it should really be possible to understand that Europeans should also refer to their intellectual heritage and the resulting behavior, especially in order to meet other religious demands and to understand their own position. Thus it should be allowed, since Europeanism has as its roots in antiquity and, Christianity, to reflect on their essence.

In the discussion of Europeanism, it must not be overlooked that it is divided into a western and an eastern component, both of which have been globalized. The leading countries for Western Europeanism were Great Britain and later the Anglo-Saxon world, dominated by the United States. The Eastern Europeanism is represented by the Eastern European countries, initially most notably by Poland, but then more and more by Russia with its expansion to the Black Sea and to Vladivostok.

These two Europeanisms and their globalization became antipodes since the founding of the British and the Russian Empire. In particular, Russia’s efforts to become a sea power since Peter the Great, and his urge for the Black Sea, the Persian Gulf and the Indian Ocean, were felt by the British to be threats to their route to India. The resulting East-West opposition continued to determine nearly all conflicts in the Near and Middle East caused by the East-West divide after the Russian October Revolution and superimposes the current conflicts in Ukraine and the Middle East.

In order to understand current political problems, the essence of the East-West opposition and the position of Europe must therefore also be discussed. The lessons to be gained from this can help to understand the responsibility and task of Europe and, as the strongest economic power of Central Europe, of Germany in overcoming and mediating the East-West opposition. This results in an outline of this elaboration:

In order to make the importance of East-West opposition clearer to Western readers, the intellectual, social and political motives of Russia as bringer of Christian salvation, Third Rome, and Eurasia, which are now increasingly determining the Russian politics, and also Poland’s antagonism against Russia, is discussed in more detail.

To understand the impact of the globalization of Europeanism on countries outside Europe, their development has been described in more detail. Every country has its own problems and can influence world peace.